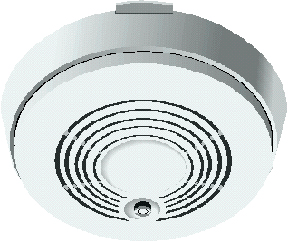 Smoke detectors are devices that are mounted on the wall or ceiling and automatically sound a warning when they sense smoke or other products of combustion. When people are warned early enough about a fire, they can escape before it spreads. Prices start at about $6 and up.

Photo-electric detectors: These type of detectors contain a light source (usually a bulb) and a photocell, which is activated by light. Light from the bulb reflects off the smoke particles and is directed towards the photocell. The photocell then is activated to trigger the alarm.

When choosing a smoke detector, there are several things to consider. Think about which areas of the house you want to protect, where fire would be most dangerous, how many you will need, etc.

The Webster Fire Department recommends that every home have a smoke detector outside each sleeping area (inside as well if members of the household sleep with the door closed) and on every level of the home, including the basement. The National Fire Alarm code requires a smoke detector inside each sleeping area for new construction. On floors without bedrooms, detectors should be installed in or near living areas, such as dens, living rooms or family rooms.

The safest bet is to have both kinds or a combination detector with a battery back up. Be sure to check for a testing laboratory label on the detector. It means that samples of that particular model have been tested under operating conditions. Check to see if it is easy to maintain and clean. Be sure bulbs and batteries are easy to purchase and convenient to install.

The placement of smoke detectors is very important. Sleeping areas need the most protection. One detector in a short hallway outside the bedroom area is usually adequate. Hallways longer than 30 feet should have one at each end. For maximum protection, install a detector in each bedroom.

Proper mounting of a smoke detector also is important. You can mount many detectors by yourself, but those connected to your household wiring should have their own separate circuit and be installed by a professional electrician. If you mount your detector on the ceiling, be sure to keep it at least 18 inches away from dead air space near walls and corners. If you mount it on the wall, place it 6 to 12 inches below the ceiling and away from corners. Keep them high because smoke rises.

Never place them any closer than three feet from an air register that might re-circulate smoke. Don't place them near doorways or windows where drafts could impair the detector operation. Don't place them on an uninsulated exterior wall or ceiling. Temperature extremes can affect the batteries.

Keeping smoke detectors in good condition is easy. Always follow the manufacturer's instructions. Be sure to replace the batteries every year or as needed. Most models will make a chirping, popping or beeping sound when the battery is losing its charge. When this sound is heard, install a fresh battery, preferably an alkaline type.

Replace bulbs every three years or as needed. Keep extras handy. Check the smoke detector every 30 days by releasing smoke or pushing the test button. Clean the detector face and grillwork often to remove dust and grease. Never paint a smoke detector as it will hamper its function. Check your detector if you've been away from home.

If you're looking for a novel gift for somebody, consider giving them a smoke detector. It's an interesting gift that can save lives and it shows that you care.

Every year thousands of people die from fires in the home. Fire kills an estimated 4,000 Americans every year. Another 30,000 people are seriously injured by fire each year. Property damage from fire costs us at least $11.2 billion yearly. Most fire victims feel that fire would "never happen to them."

Although we like to feel safe at home, about two-thirds of our nation's fire deaths happen in the victim's own home. The home is where we are at the greatest risk and where we must take the most precautions. Most deaths occur from inhaling smoke or poisonous gases, not from the flames.