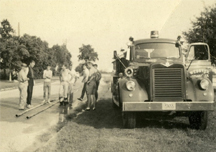 The community known today as Webster, Texas was founded in 1879 by James W. Webster and was originally called Gardentown. The area served as a pickup point for supplies and materials for those traveling to Galveston.

In 1890, a post office was opened, and the town with a population of 140 was renamed Websterville. The oil and railroad industries reached Websterville in 1919 but had little effect on the population or growth. In 1958, the establishment incorporated and became known as The City of Webster.

The Fire Department was founded before the City incorporated and would later be adopted by the City, becoming one of its most valuable entities. In 1956, Harris County citizens Milton T. Ervin, Thomas F. Horan, C. D. Landolt, Rayburn McClinttock, and Archie Johnson founded the Webster Volunteer Fire Department for the protection of the town and surrounding county. Ralf Erwin, also a citizen of Harris County, would serve as the Department's first fire chief. The Fire Department operated out of one station and had less than 10 members that protected no more than five businesses and less than 200 citizens.

Today, the City of Webster has a population of over 10,000 and has more than 1,500 businesses. The Webster Fire Department is staffed 24 hours a day 7 days a week by dedicated professionals with a great desire to serve their community.