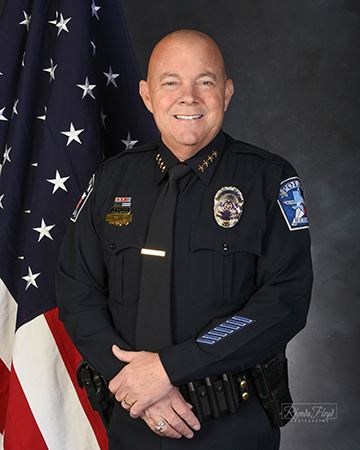 Daniel Bo Rogers was appointed to the Chief of Police position on March 6, 2018.

Bo Rogers began his career in law enforcement in August of 1984 with Galveston County Constables Office where he worked until December of 1992. Rogers was hired by Webster Police Department on July 10, 1993. Rogers' assignments with the department have included Patrol, Narcotics Detective, Corporal, Detective Sergeant and Traffic Sergeant, as well as the Lieutenant over the patrol and support services divisions. Rogers holds numerous TCLEOSE certifications to include Master Peace Officer, Standardized Field Sobriety Testing and an Instructors Permit. Rogers holds a Bachelor's Degree from Columbia Southern University in Criminal Justice Administration and is a graduate of the 110th A.O.C. at the Southern Police Institute at the University of Louisville. Rogers has served as an adjunct instructor at several Police Academy's and at Kaplan University's Criminal Justice program.